This is a guide to make a very simple MQTT-enabled temperature sensor using a Wemos D1 mini ESP8266 board and a DHT-22 temperature and humidity sensor. The parts can be had for a few pounds/dollars/euros/rubles/dongs/sheckels/whatever, and the build is pretty much plug and play.

All it needs is USB power, and the firmware is all plug and play thanks to ESPurna. You could do a similar thing with an ESP-01, but it wouldn't be so easy to flash or power. Besides, I had these parts lying around.

This post ended up covering both Tasmota and ESPurna, and serves in some way as a practical comparison for building a working firmare using either of these projects, to get a simple sensor running on the D1 mini.

While I started out with Tasmota in an attempt to try the project out, I ended up finishing the project in ESPurna. So for a complete solution, perhaps skip to Software using ESPurna. 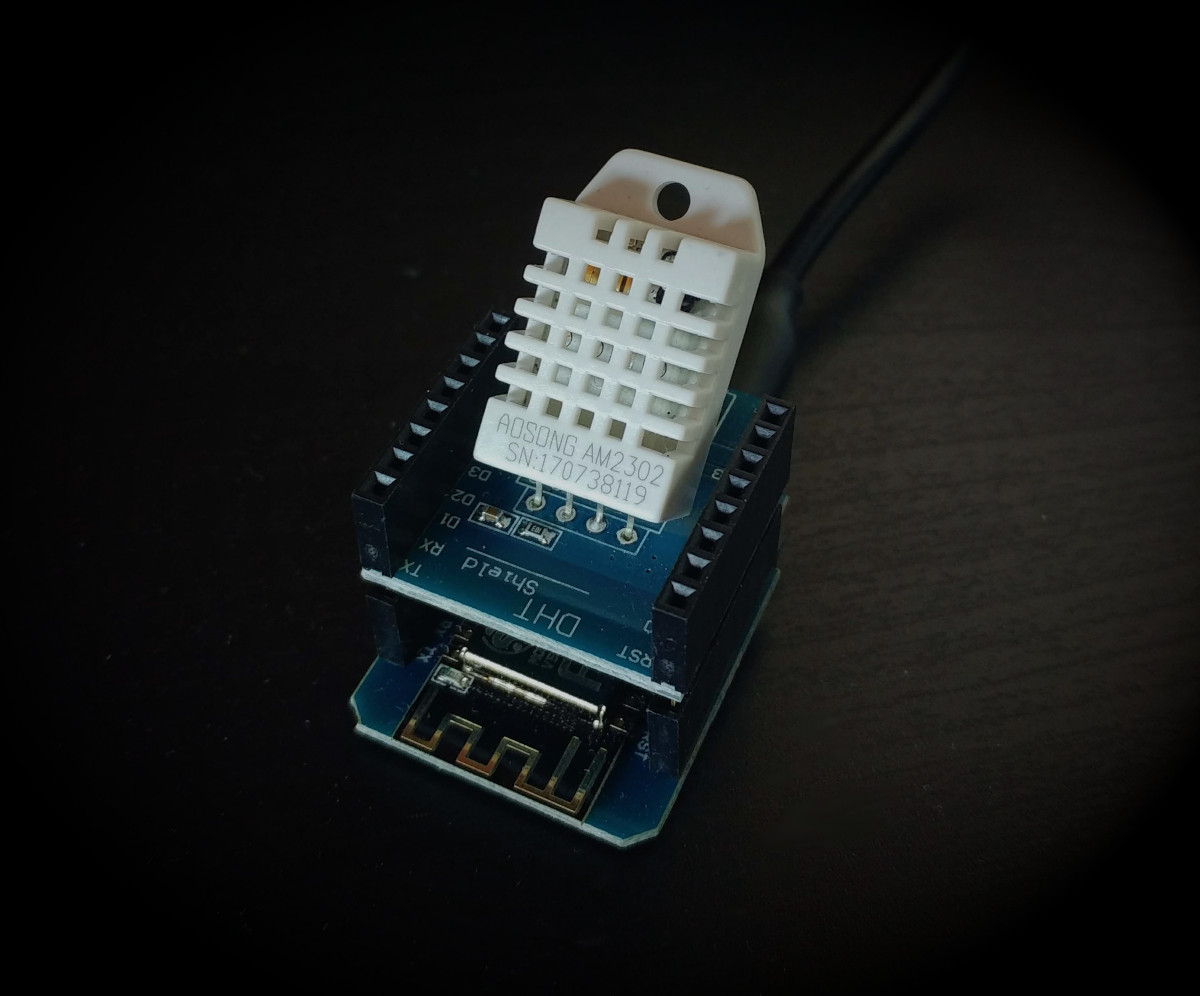 If needed, solder up the pin headers onto both boards, and plug them together. Plug it in to your computer via USB in order to flash it.

Tasmota allows for template based configuration of hardware, which ESPurna doesn't yet. We could program custom firmware, or modify ESPurna, but for the moment, I intended to spend an hour making this.

We'll build from source, the precompiled stuff is all for Windows or Mac only, and compiling it is more fun anyway. Again Tasmota uses Platformio, which is nice, and allows us to build and flash in one. Tasmota's slightly confusing build instructions are here.

I avoided creating a new configuration, but if you want to customise it, it appears you have to write a custom header.

We'll flash it and see if it includes the DHT-22 driver. Plug in your D1 to USB and run:

Apparently, to set a static IP, navigate to 192.168.4.1/cs for the Tasmota's console, and then enter IPAddress 192.168.1.164 for the IP you want. But this doesn't work. Futhermore you have to erase the device's memory and reflash it in order to reset it to use the SoftAP mode again, presumably because settings persist in flash.

At this point I gave up on Tasmota.

Tasmota is certainly intended to be more end-user-orientated than ESPurna, it has flashing tools for Windows and Mac, and the build process isn't as streamlined as ESPurna, by a long way. It does, however, have template based configuration on its web interface, which is why we were drawn in to using it.

Having now compared the two, I have no doubt that I prefer ESPurna :)

If you just want to keep everything as default (user admin, pass fibonacci, wiki), use the following:

This includes the following flags for the sensor (sensors are documented here). The DHT-22 shield has the sensor wired to pin D4 on the Wemos D1, which corresponds to GPIO2 on the ESP8266 module (Google "Wemos D1 pinout"). DHT_CHIP_DHT22 is default.

You may need to run the following on some Linux systems prior to building:

Now, simply navigate to your pre-configured static IP and log in. If not using pre-configured WiFi credentials, SoftAP mode will begin once the device is powered, with the web interface at 192.168.4.1 after connecting a device to the network created by ESPurna.

This works nicely with Domoticz once an IDX has been assigned to the temperature sensor on the ESPurna web interface. It looks like ESPurna has a respectable range of sensors, too, which is nice.

As far as I can tell, ESPurna currently only supports separate temperature and humidity sensors in the Domoticz UI, not the combined sensor type. These should be added as virtual sensors, having an MQTT broker on your network and having added a Dummy and MQTT devices in the Hardware configuration on Domoticz:

Configure the correct IDX values in the Domoticz tab in ESPurna: